Camping and Rafting during the COVID pandemic

After being mostly at home for the past couple of months, the mountains were calling. Spring is here in Colorado, rivers are flowing, and the large blue raft in my garage seemed to be inching its way closer to the outside. It's time. Our quaranTEAM family was all in too. I decided to work super late on thursday night so we could get packed up and out the door on friday in order to arrive at our campsite with plenty of daylight to spare. I set up the ol' 16 footer for paddle rafting, hooked up the trailer, and headed west towards the collegiate valley around Buena Vista. When we arrived, our favorite campsite was still availble.

This campsite is surrounded by 14ers on 3 sides, and a perfect little creek flows adjacent through the valley and there is plenty of space for us to all spread out. The kids immediately run down the little path to the creek and commence with driftwood sword fighting. The girls spend some time playing with the new Portugese water dog, Sydney while Cleo, the 4 year old silver lab sprints circles around the camp and spends a good deal of time rolling in the fresh mountain dirt. She prefers to be as dirty as possible when camping. 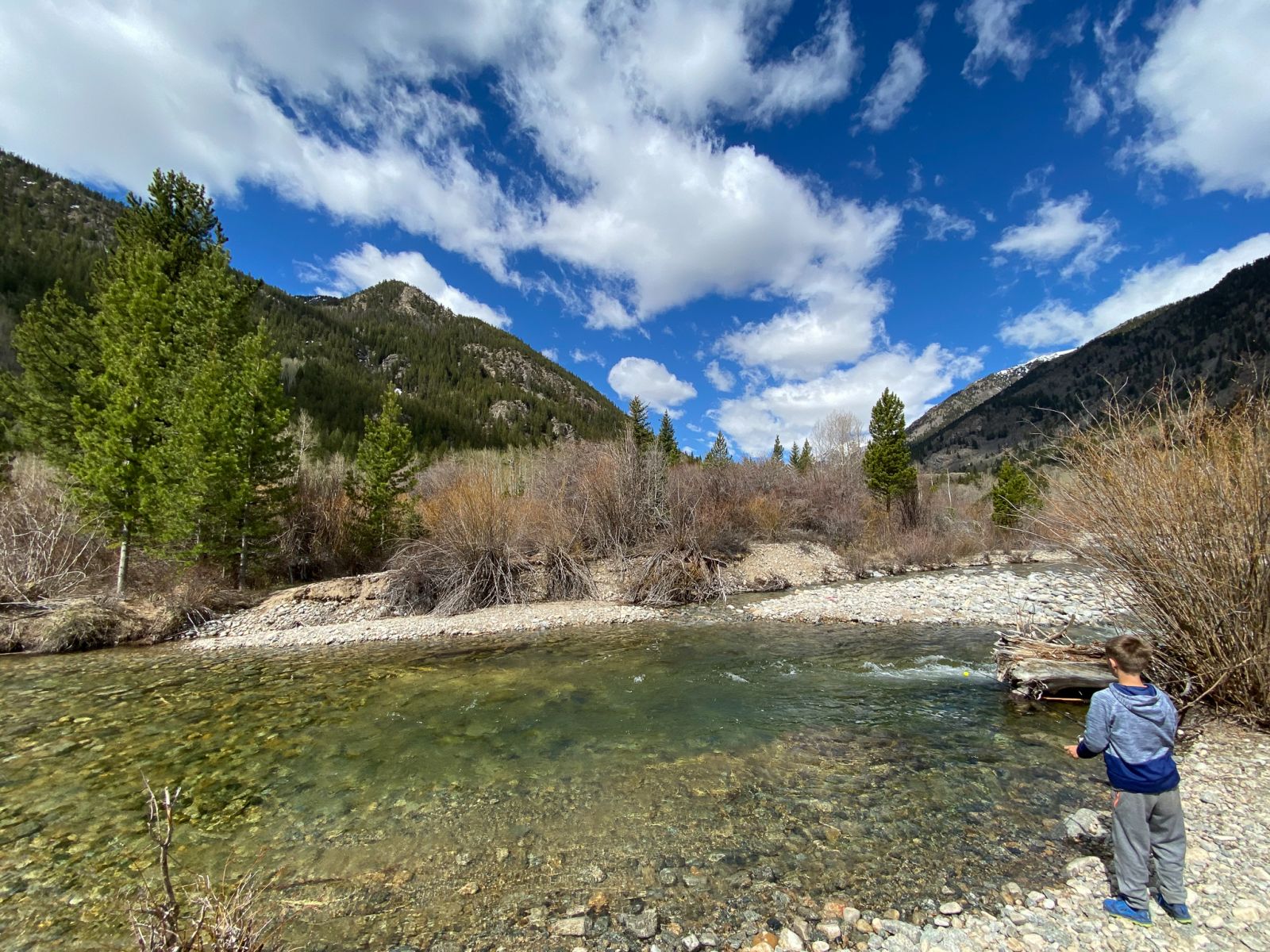 Saturday was spent mostly hanging out at camp and enjoying the peace of the mountains. Thankfully there were no jerky RVs around us running generators all day like the last place we tried to camp. All we could hear were the sounds of the creek, the birds, the wind, and 3 young ninja warriors somewhere in the woods nearby. I took off for a few hours to meet some friends to run the Numbers, a great class 4 stretch of the Arkansas river. It was a little weird running shuttle with masks on, but a small price to pay to be able to get out boating with friends. The kids spent time fishing in the creek and playing with the dogs. Cooper even caught his first fish ever. Somehow I missed the photo of his smiling face after landing his first fish. I won't soon forget it though.

Nicole and John took off to do a hike on the trail that was nearby. They planned on a short hike, but ended up hiking 4 miles straight up almost to treeline. The came across a pretty impressive avalance path on the way and came pretty close to summiting a 14er. However, they were not actually prepared for that, since that was not part of the plan, so they turned back when they reached the high alpine valley before the last push to the top. They came back raving abou the beauty and adventure they found on the trail.

That evening we made tacos and then sat around a propane stove to roast marshmallows. Due to COVID19, the forest service has enacted a fire ban for all of the national forests around here, so we weren't able to have a campfire. But we made due the best we could with the propane stove. It's cold in the mountains in May, so when you don't have a fire, it's easy to crawl into the cozy tent early to read a book with the family. Both families have the same giant Big Agnes tents that are warm and spacious. Ours is a 6-man and the Boyles have the 8-man version.

The next morning brought about an excitement in the air. Today was the rafting day! Everyone got up early so we could make eggs, sausage, and breakfast potatoes. And coffee, lots of hot coffee. Then we packed up camp and left our amazing campsite to go run Brown's canyon. Brown's is normally the most heavily commercially rafted section of river in the US, but due to COVID, commercial trips can't operate until June 1st. So today would only be private boaters.

We arrived at the put-in and John and Nicole set shuttle while we we rigged up the raft and got all the kids geared up. Dan gave his excellent safety brief while we were waiting on the shuttle drivers to return. Cleo was intent on chasing as many sticks as possible into the river before we left, but as soon as it appeared that we were about to launch, she hopped right into the boat and found her spot. We all loaded up and set off down the river. The boys got the way front so they could get splashed and the girls got set up to paddle. As we floated down the first couple miles of easy whitewater, Dan called out his raft guide commands so we could practice maneuvering the boat through the rapids. So far, it seems like we have a pretty good team going here. We were in-sync and the girls were doing great for their first time paddling the raft. 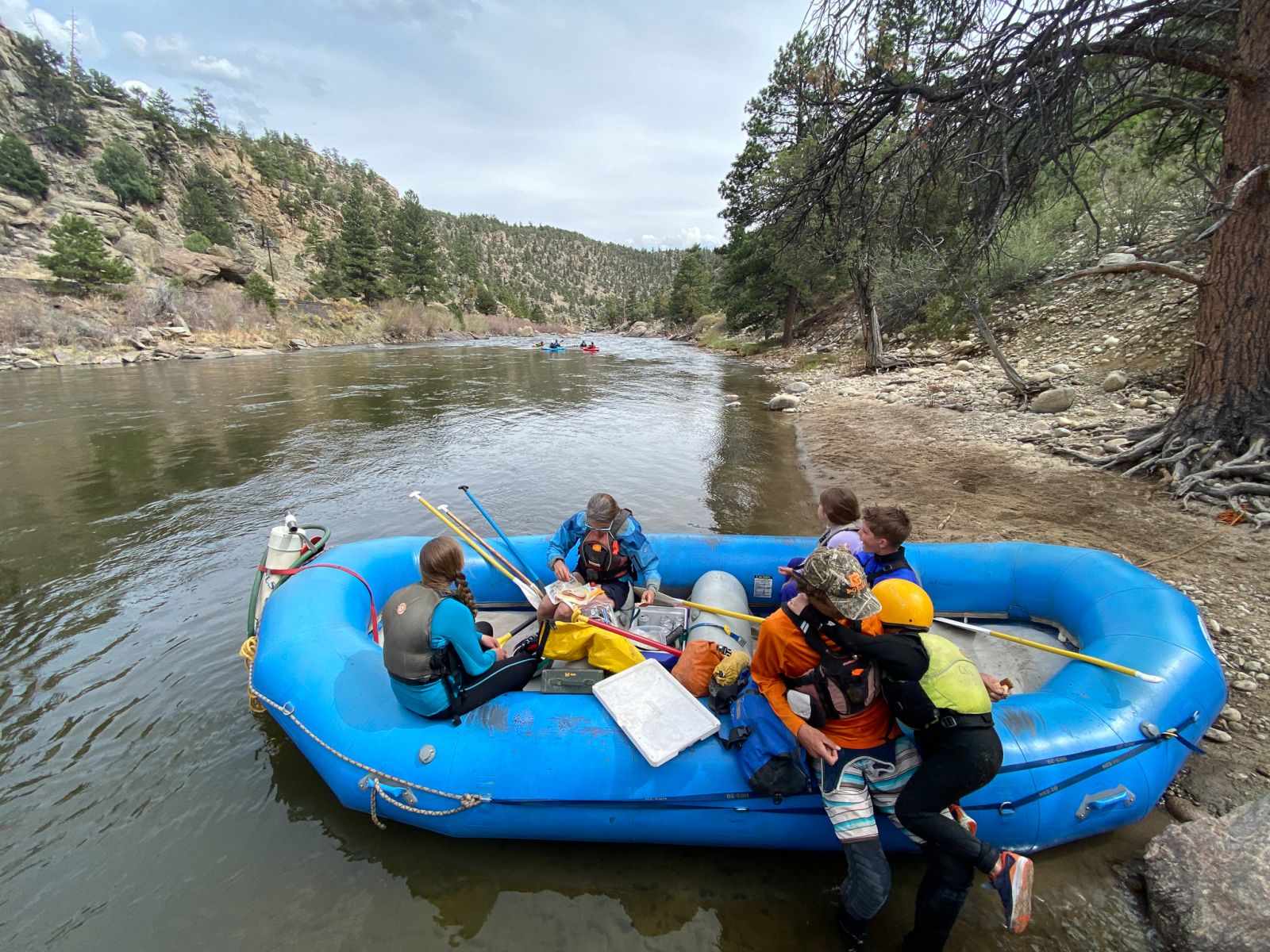 As we approached the the canyon mouth, Dan continued to tell us all the whoppers he's told his commerical rafting clients over the years. Dan really knows this stretch of river well, and it was fun to hear all the raft guiding stories. I've known Dan for 20 years now, from us both being couch surfers in college, to moving on to kayak instruction and raft guiding, to being dads with awesome families who love to get out on the river. To us, sharing the river with our kids is the most rewarding thing we could be doing. The looks on their faces when we go throught the first rapid, "Canyon Doors" reminds us of why we do this. Why we spend the time loading gear, listening to complaining about being too hot or too cold, or my wetsuit is uncomfortable. It's all worth it when you see those smiling faces. It's not just smiling, it's a unique combination of fear, adrenaline, and pure joy that I've only seen on the river. 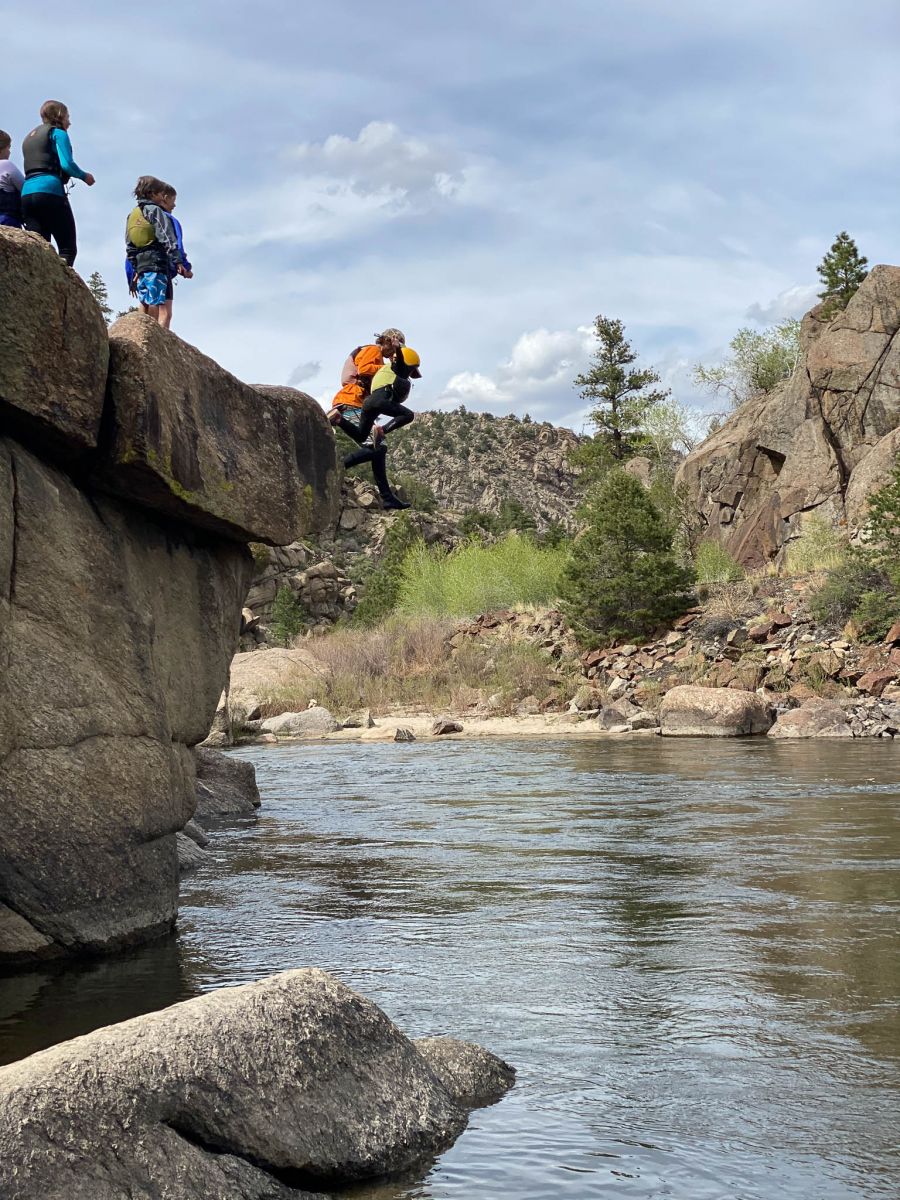 We ran the rapids one after the other. Pinball was very technical, and Dan guided us through barely touching any of the rocks. He apparently knows every rock on this river. Zoom flume was next which is the biggest rapid on the river. As we approached, it has a legitimate horizon line. Nerves were running high until we dropped down the flume. The screams and excitement were echoing through the canyon as we made a perfectly clean line. After making it through all of the rapids without a single hiccup, we stopped for lunch at Jump Rock. Rhys has been hellbent on jumping the first cliff of the summer and leads the small group of kids straight to the top as soon as we arrive. They are all shivering at the top of the cliff, and decided it would be better to eat lunch and warm up a bit first before the plummet. There was some doubt as to whether or not they were going to jump. "I'll do it if you do it", Zoe says to me. "Okay", I say. Then one at a time the whole group jumps over and over. Sawyer, only 7, jumps while holding onto Dan's hand for his first cliff jump ever. After Jump Rock, we loaded back into the boat and floated out to the take out. The happiness was contagious as we passed other rafters that we had seen earlier on the river. Everyone was so thrilled to be on the river on such a beautiful day. It felt kind of.... normal. It was nice to escape the daily life in quarantine and truely forget for a few hours.