When I first moved to Durango CO in 97’ I started checking into the area’s mutli-day kayak scene and the Brazos Box in New Mexico popped up on my radar. Folks had talked about the run like it was a unicorn...an illusive trip through a wicked deep gorge with a tenuous approach, hard whitewater, epic scenery, and rugged terrain. Needless to say this description captured my fancy.

Traveling to the Upper Taos Box and other NM places I had driven by the canyon many times and looked longing over to it. What was down there and how could I get in there? I must have asked myself those questions and so many more a hundred times. 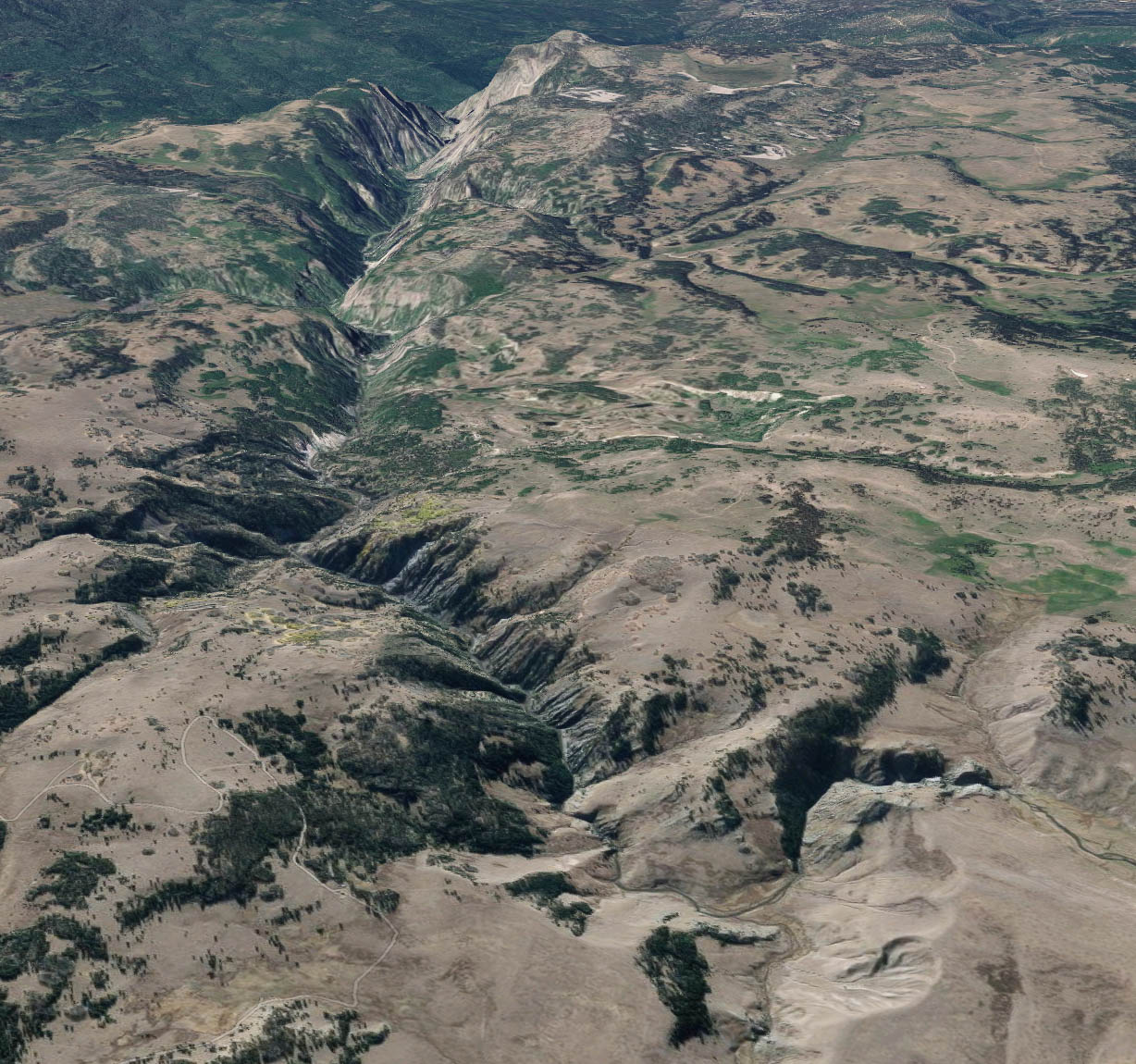 For years I had wanted to get in there yet got shut down several times because of a few factors:

This section of river has hardly been paddled since it’s first descent for all the reasons stated above and more, so getting in there and paddling this stretch was something I was really keen on.

Fast forward to the spring of 2020 and for unknown reasons, the stars aligned and the Brazos Box was on!!!! I had some of the usual suspects I roll with around here so the crew was solid and tight. We spent a few weeks figuring out our shuttle logistics and the approach (which is the crux of the run) using google maps, and then started gauge watching. We heard optimal flows were between 400-700 on the diurnal and it was sticking higher than that for a while. All of a sudden the flow gauge started dropping in...the rally cry was sounded and the game was afoot! We loaded up in Durango after work on a Thursday afternoon and rallied out of town. One of our friends was driving down from Denver who was part of the shuttle so we met up with him in the dark at Tierra Amarilla NM, dropped his rig at our friend’s takeout house and drove towards the put in. Elk dodging became the norm as we approached our legal access road. Pulling off the highway and onto dirt everyone was hooting and hollering in disbelief, surprised that we were possibly going to make the Brazos Box happen!

The dirt road heading towards the put-in is at 10,500ft and as the night drew on and we drove slowly into the unknown on a beater 2-track, it got colder and colder. We finally pulled over after 3 or so miles and hunkered down for the night in a sweet meadow surrounded by dark timber and snowdrifts. It was a beautiful night, clear and cold, and everyone slept well knowing the next day needed a lot of effort to pull off. In the morning we drove the vehicle out, ran back, packed our stuff, and started the 4-mile hike to the put in. I am sooooo thankful that the trek to the put in had no major inclines or declines. Rather it was a gradual climb (no more than 400ft) and descent which made an 80+ lb kayak bearable on my shoulders. There were even snowfields that we could drag our boats across!!!! 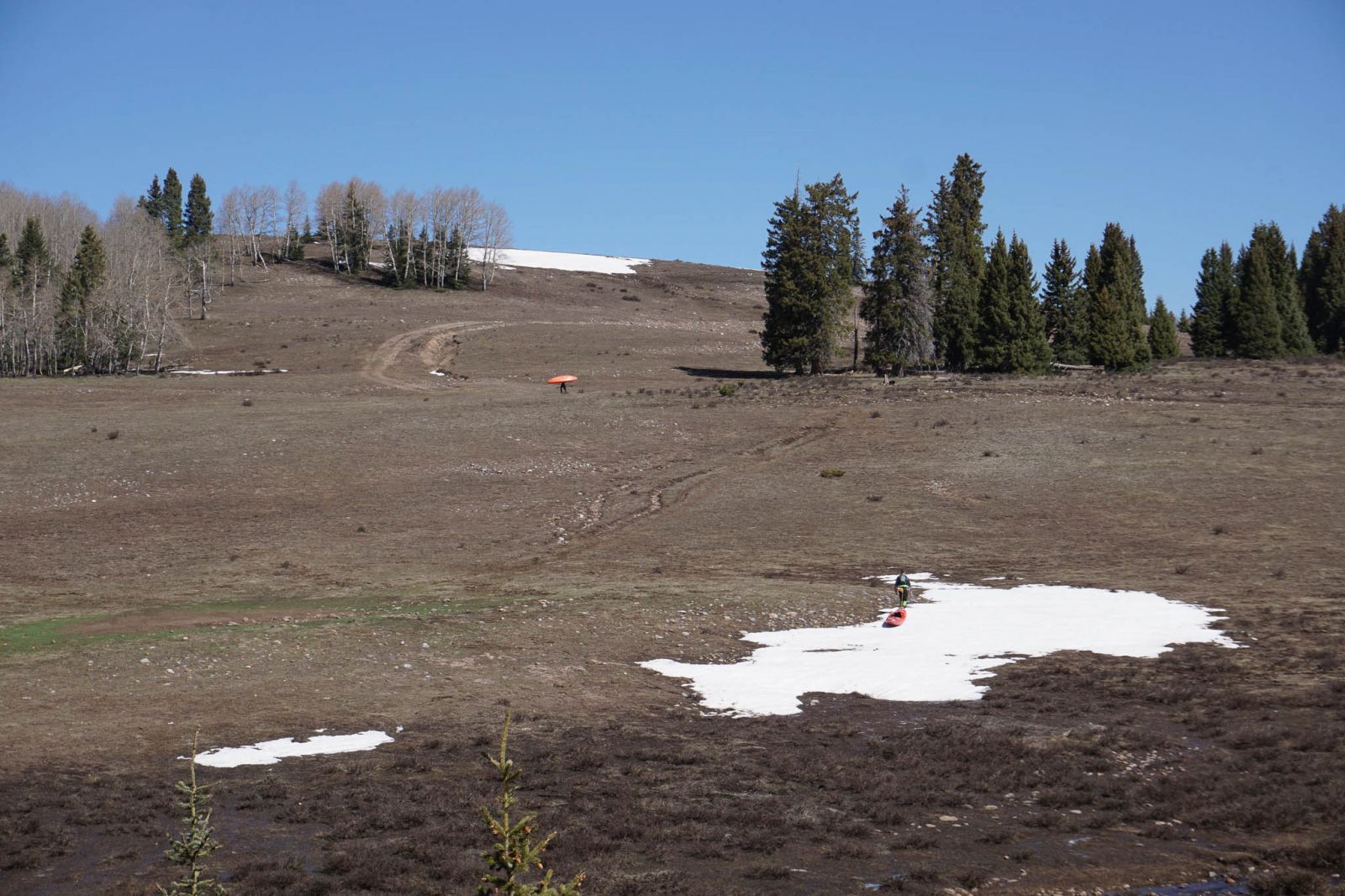 Arriving at the put in everyone was elated. We finally did it … we were finally at the put in for the Brazos Box. For me it was especially sweet. I had been working on this for 2 decades and to finally be at the put in was amazing. We had 2 days and one night to get through the canyon safely...we figured that would be enough time.

The run starts off pretty mellow with fun long rapids in the grade III/IV range with bitter cold water. You’re also at around 9500 ft of elevation so it’s a chilly start to a wicked adventure. After 3 miles or so you get to a significant section of whitewater and the first portage of the run. The guidebook states that it’s been attempted with varying degrees of success/failure and looking at it, it didn’t seem that appealing to give it a go. So we shouldered our boats, climbed way up high on an ever-moving scree slope and did the portage. This portage made the portage on the Black Canyon of the Gunnison feel like a cakewalk. Steep and loose with any slip/fall resulting in a catastrophic plummet down hill and into a major rapid. After the portage is one of the run’s most fun rapids. A long wave train to an 8ft boof! Time to get the lean on :) 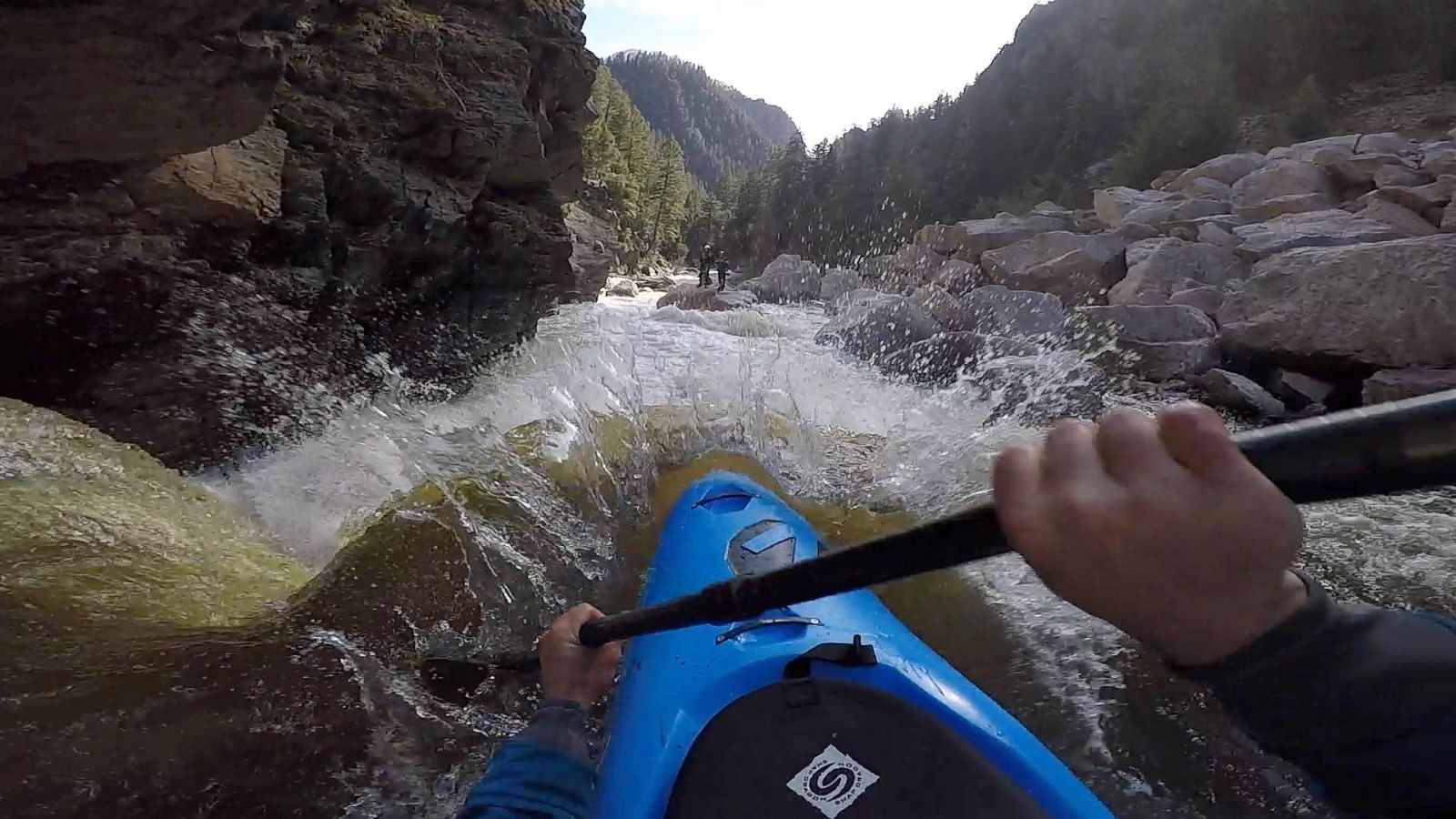 The rest of your first day has you routing through complex grade IV/V whitewater with plenty of scouts and some grade V+. Being able to boat scout is critical in making good time. The river is relatively new with constantly changing rapids and new rocks. The rocks are sharp and dangerous to your boat so moving through these steep and boulder choked rapids and not destroying your boat is critical. This is probably a good time to discuss the canyon itself. As you paddle the Brazos Box the walls rise up almost 1500ft and you begin to realize that this is a granite gorge with little chance of escape should something go wrong. The terrain is so rugged and the cliffs so steep and high, that if there were an accident and rescue was needed it may not be available immediately. We only found 1 side canyon in which we could potentially escape if needed to get help. Yet it also seemed almost impossible. We discussed this and it became very evident that the only way out of the canyon was downstream. Swim and loose a boat...that would be epic because you’d have to hike out riverside and the canyon walls come down to the water in many places forcing you to swim. Get hurt and require extraction...phew that scenario is even worse. This canyon is so steep and walled in that even though we saw the sky, our SPOT devices would not send out messages. This is a truly committing grade V+ adventure. 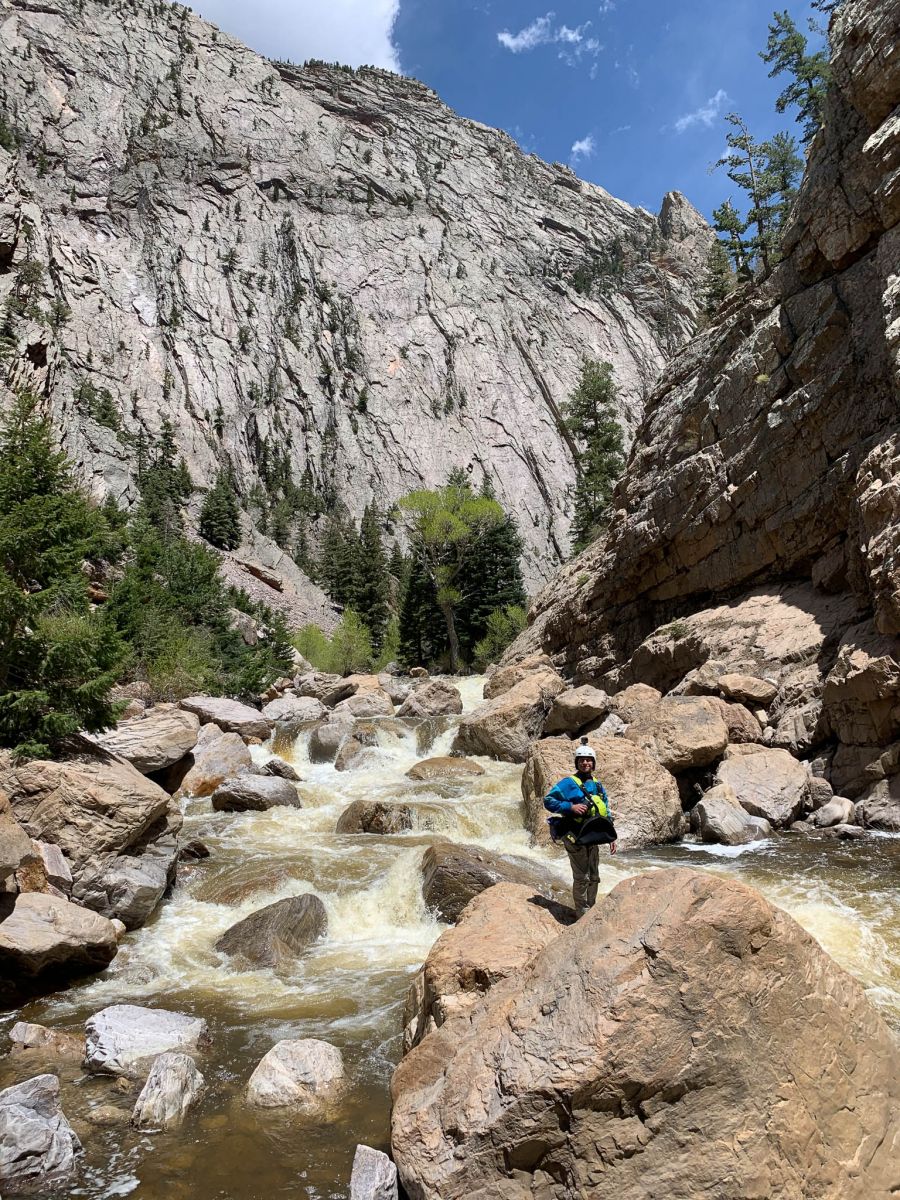 At some point during the afternoon of our first day it became apparent that one of our boats was cracked. Shortly after checking it out and seeing the damage, another boat also cracked. It was time to pull over for the night and get into some plastic welding!!! I brought a thick roll of bituthene anticipating such destruction and we were all psyched to have it. We also brought a stove and fuel which really came in handy with the welds. 3 hours later we had 2 makeshift welded boats that would hopefully get those 2 paddlers out of the canyon. In the end one weld held, the other didn’t yet at least we got out in one piece!! 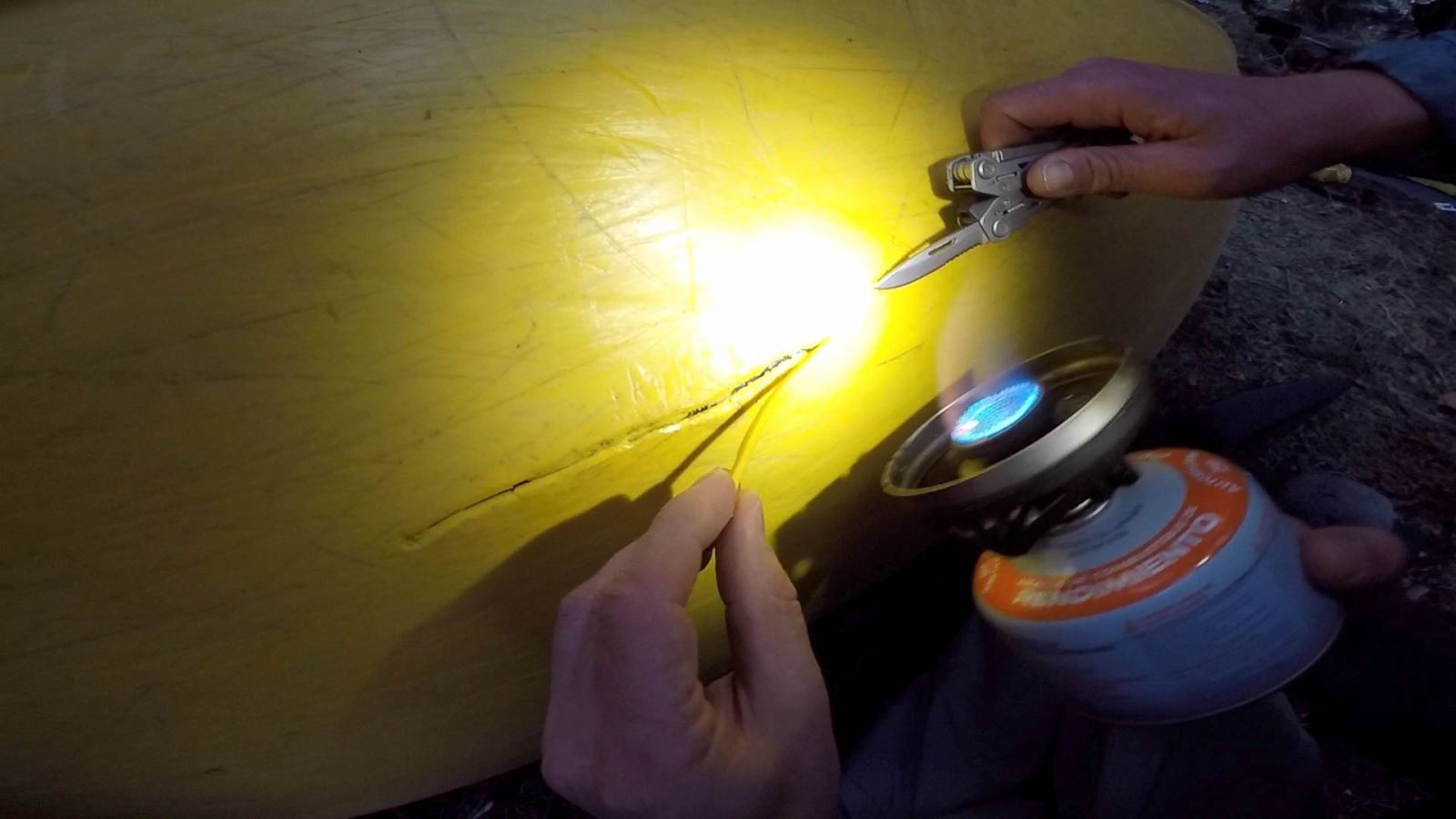 Day 2 saw more of the same style of paddling. Steep boulder-choked rapids with many scouts and routes, a few portages and epic scenery. The Brazos Box truly rivals the Black Canyon of the Gunnison in relief and beauty. The further you go, the higher the canyon walls grow eventually culminating in a section of river that is truly epic. After this section he canyon walls eventually disappear and you're left with an enjoyable paddle out to a bridge and the take out. 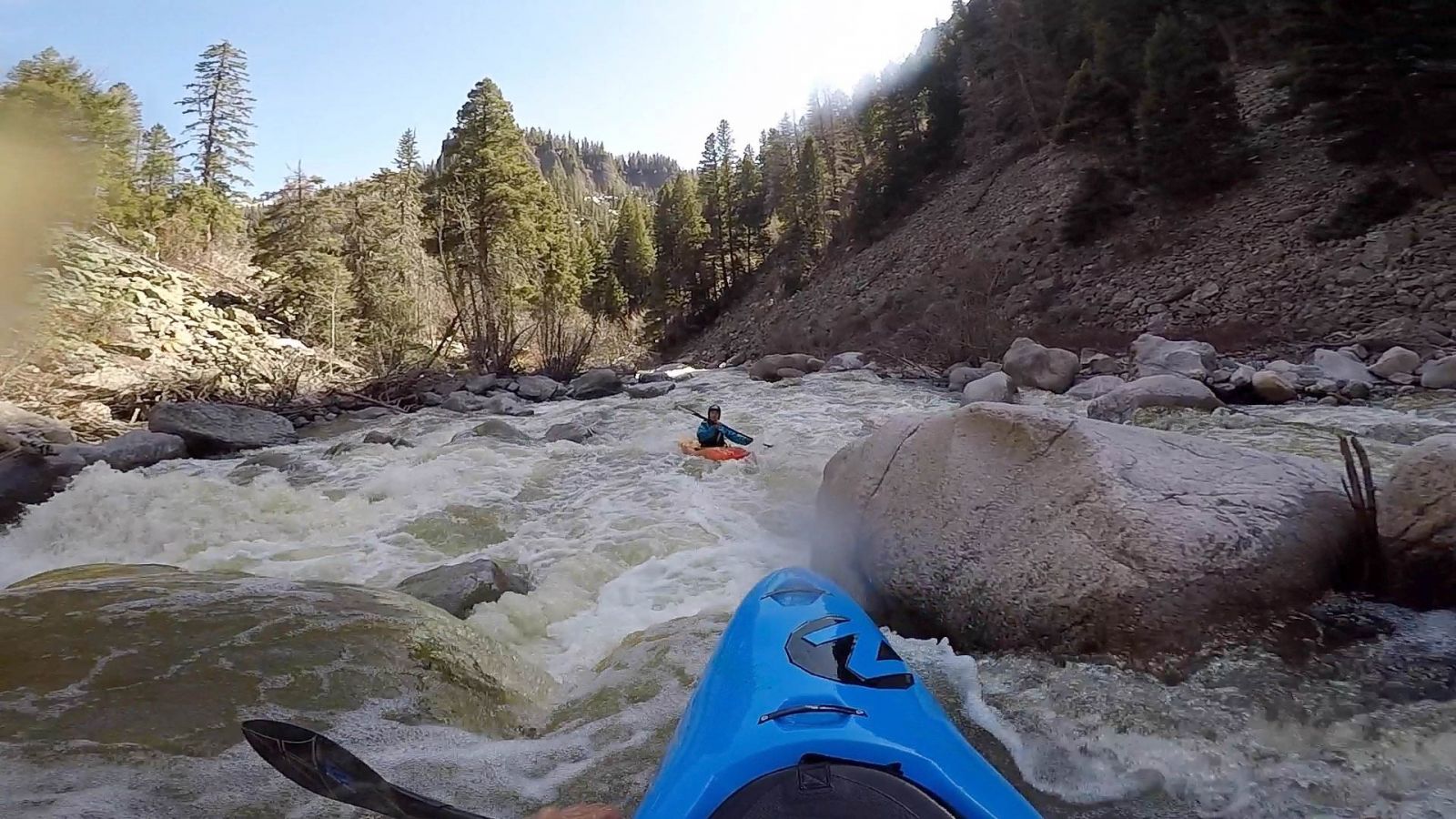 All in all this is a wicked run and one that I had on my list of must do rivers for years. Looking back at how it all went, the amazing group I was with, the way we charged through the canyon...it couldn’t have gone much better. Yeah we broke a couple of boats yet we had the knowledge and material to persevere and fix them. We figured out our approach which is the crux and pulled it off. We charged downstream through unknown waters and had a great time figuring it out. We learned a lot about ourselves and each other and paddled through a section of whitewater and through a canyon that has seen hardly any descents. 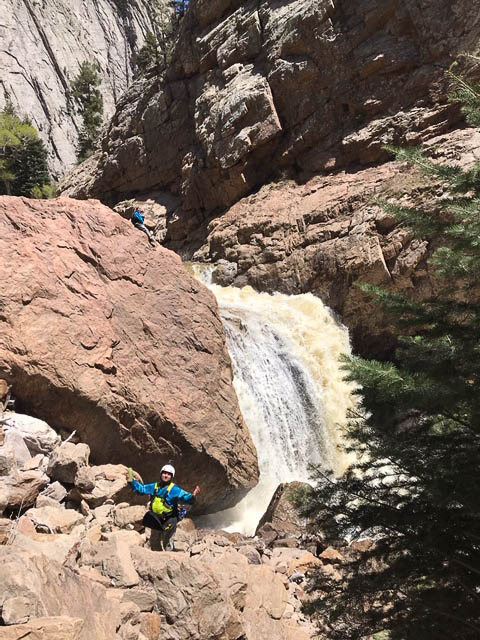 Would I do it again? You bet. I just hope I’m fit enough to try one more time :)

Salamander Ultranighter Bags - Flotation and Dry storage bags to make any overnight kayak trip go smooth. These are available in Small and Large. 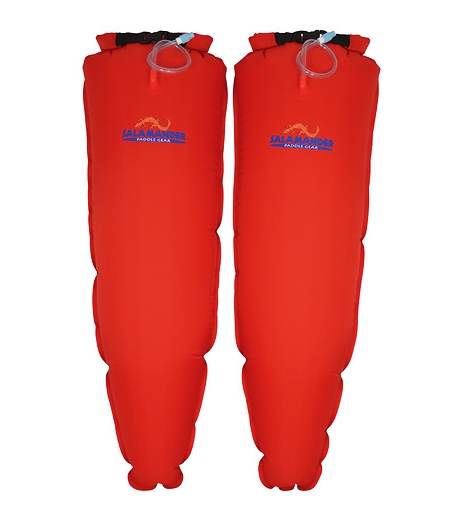 Newly re-designed with a separate sealed bladder from the storage area. Now you can pack your gear, roll down and close the bag, stuff it in your boat and blow up the bladder. This keeps your gear sealed and dry while the separate bladder holds you gear in place without losing any air! Designed to keep your supplies dry and protected from water brought in by boat condensation, capsize, or hull leakage. Made from 210 Denier PU Laminated Oxford Fabric that ensures the bags are lightweight and strong. The tapered shape of the bags allow them to pack tightly into difficult spaces, maximizing the dry storage potential of all boats. These Large bags are large enough to hold a sleeping bag. 2 bags per set. Click here to order online.